There’s so much to love in a Florida Highwaymen painting.

For starters, they’re so “Florida.”

The color first strikes anyone looking at a Highwaymen painting.

The Highwaymen worked in a Technicolor, “Wizard of Oz,” richness unobserved elsewhere in art history. Matisse’s colors, while vibrant, were softer. Van Gogh had the richness, but not the heat.

Highwaymen pictures are sunburned. Roasted. Humid. Like Florida itself.

A version of Florida, anyhow. One that’s mostly memory now.

The Highwaymen painted Florida as a natural paradise. Before Epcot, before Universal Studios, before South Beach. Before turnpikes and strip malls tore up the state.

The Highwaymen didn’t simply show Florida, they took you there.

In their paintings, you can hear seagulls shrill and sea breeze rustling palm fronds. You feel sand blowing across the tops of your bare feet.

Nearly 100 paintings from a core group of Highwaymen have been on view across the state at the Orlando Museum of Art in 2020, the Tampa Art Museum in 2021 and then on to Selby Gardens in Sarasota.

“They were unaware and unconcerned by academic color theory, they let their intuitions flow,” Gary Monroe, a Highwaymen scholar and guest curator of the exhibition told me. “They were young and very alive, so their colors were metaphoric celebrations as they described the land they knew since childhood.”

Working in and around the Fort Pierce area (roughly halfway between Miami and Daytona Beach) beginning in the 1950s, these artists, who were never formally organized by rules, dues or a business plan, depicted the state’s scenic coastline and wild backcountry.

“Livingston Roberts told me that he’d drive out of town and into the fields, just to see how the grasses changed by the seasons,” Monroe recalls. “As for the striking skies, as a native Miamian, these are less metaphoric than actual, just look toward The Everglades for a few minutes as the sun sets during part of the year and bloody red is not too far from reality.”

The Highwaymen painted with oils, applying paint “wet-on-wet,” not letting under layers dry before working over them. They did not utilize underdrawings or photographs to conjure the images captured. In fact, they didn’t paint en plein air, they worked at home from memory and imagination.

These artists, all black, worked outside the traditional artistic community of lessons, galleries and museums. With few options available to them in the Jim Crow South, this is how they chose to make a living as opposed to laboring in Florida’s agricultural fields.

As such, they didn’t have access to the same materials mainstream fine artists were working with at the time.

“(Highwaymen) painters told me that the oils, the hues and its quality, were different than those manufactured later and that the Upson board (a builder’s material on which they customarily painted) handled the paint differently than conventional painting surfaces,” Monroe added about the artists’ ability to uniquely capture color the way they did.

Monroe has cataloged 26 original Florida Highwaymen artists, one of whom was a Highway-woman, Mary Ann Carroll. While they were mostly self-taught, they received a helping hand from Florida’s premiere regionalist at the time, A.E. Backus.

“He was a social progressive in a conservative place,” Monroe said of Backus who lived in Fort Pierce. “Backus gave Saturday morning art instruction classes and Alfred Hair attended the classes while a high school student; he learned the formulaic approaches that he would soon alter as a result of ‘fast painting.’”

“Fast painting” was a necessity for the Highwaymen. They didn’t have time to agonize for weeks over composition, work in large formats, deliberately ponder individual brushstrokes, or allow the days required for oil paint to dry before offering them for sale. They needed money so they worked fast and in extraordinary volume. Educated guesses put the output of the Highwaymen at 200,000 paintings. Some among their number could produce dozens in a single day.

“Making money preceded making art and speed defined (Hair’s) style,” Monroe said. “What he didn’t bargain for was that by corrupting the cherished concerns of conventional landscape painting, he would alter the genre and arrive at a fresher and more aesthetically relevant form than had long been the norm.”

Hair’s paintings minimized descriptive detail and instead emphasized mood and atmosphere with broad tones of color and quick gestural brushwork.

At roughly the same time, a few miles to the north, Harold Newton, another aspiring self-taught artist, also sought counsel from Backus.

“He painted effortlessly with unusual flair and fidelity, but still in the manner of Backus and other professional artists,” Monroe said.

Newton is considered the first artist to develop the Highwaymen style and the means of reaching an audience through door-to-door sales. That’s right. Door-to-door sales from the trunk of a car, often along Florida’s Route 1 which travels the state’s Atlantic Coast from the Florida Keys to the Georgia state line.

That’s where the “Highwaymen” name comes from.

The speed of the painting and volume of work produced allowed for the artists to bring prices down. That opened access to the work for tens of thousands of Florida residents and tourists.

“There were so many of these paintings along Atlantic coastal Florida, and beyond, that the imagery, I believe, seeped into viewers’ sub-consciousness and the American psyche, giving the idea of mythic Florida,” Monroe said. “Paintings hung in homes and in offices (came) to be so omnipresent… they cast their spells, they became part of the collective experience of the American dream.”

The popularity of Highwaymen paintings waned in the 1980s. The garish pictures, which tap danced all around and over “kitsch” without ever falling victim to it, were at odds with 80’s cravings for glitz and glamour and “cool.” That, remember, was the decade of “Miami Vice” and high rise, beachfront condos and cigar boats. The Florida of the Highwaymen was being pushed out.

“Post-war Florida was a center for reimagining oneself,” Monroe said. “Highwaymen artwork engendered optimism as they hung in the shadow of Cape Canaveral during the burgeoning Space Age and as a boom time saw many people relocating here to start afresh, to replace old memories with new ones, the paintings were liberating, like trophies proclaiming one’s arrival.”

I had the opportunity to talk to Alfred Hair’s son, Kelvin Hair, on my “Welcome to Florida” podcast in spring of 2021. Give a listen. 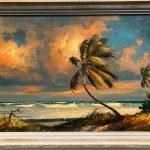 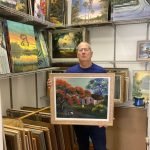 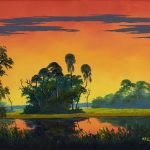 Who were the Florida Highwaymen?

Tschabalala Self at Baltimore Museum of Art