The artist explained her intention when previewing the exhibition “Deborah Roberts: I’m” at the Cummer Museum of Art and Gardens in Jacksonville on September 16. The third hand pays homage to Okwui Enwezor (1963-2019). Enwezor was a much beloved curator, art historian and writer, relentlessly advocating for Black and non-Western artists to realize the acclaim their work had earned them.

Enwezor, a Nigerian, remains the only person to ever curate both the Venice Biennale (2015) and Documenta (2002), arguably the two most important events in global contemporary art.

At the time of his death from cancer, Enwezor was working on a series of public talks for the Alain LeRoy Locke Lectures at Harvard University focused on the intersection of Black mourning and white nationalism in American life as articulated in the work of contemporary Black American artists. Those ideas would form the basis for his final exhibition, “Grief and Grievance: Art and Mourning in America,” which was on view in 2021 at the New Museum in New York.

Between the fall of 2018 and March 2019, Enwezor tirelessly worked on “Grief and Grievance,” drafting his thesis for the exhibition, compiling lists of artists and artworks, selecting the catalogue contributors, and speaking with many of the invited artists. “Grief and Grievance” highlighted the intertwined phenomena of Black grief resulting from racially motivated violence and a politically orchestrated white grievance, as each structures and defines contemporary American social and political life.

Will Deborah Roberts Jamal experience that grief? Has he already?

“You ok, just rest up,” Roberts explained of what Enwezor’s hand signals to Jamal.

A gentle and reassuring touch.

Even in death, Enwezor’s “hand,” his influence, remains prominent in the work and profile of Black artists.

“Deborah Roberts: I’m” remains on view at the Cummer Museum through December 4, 2022. 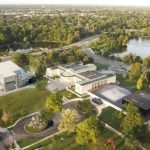 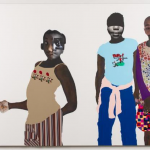 October 17, 2022 No Comments on Deborah Roberts: on top of the world 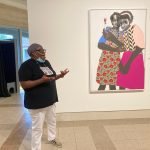 October 6, 2022 No Comments on Deborah Roberts finds her voice thanks to Ron Artest?
Black artistCummer Museum of Art and GardensDeborah RobertsFemale artist