Growing up on the Navajo Reservation, Shaun Beyale didn’t have running water or electricity. He did have comic books.

Good thing, because when the global titan of comics, Marvel, needed an illustrator for its foray into Indigenous superheroes, the creative force behind the Avengers and the X-Men knew just who to call.

Through his childhood in Farmington, New Mexico, into high school, on to Santa Fe where he earned a degree from the prestigious Institute of American Indian Arts and now spurring his career as a professional artist, Beyale retained his passion for graphic arts. His talent has seen him rewarded as head artist for “A Friend in Need,” a comic book due early in 2022 starring River, a new Indigenous superhero who has joined the Marvel Universe.

“I still can’t believe it,” Beyale said about drawing for the legendary company which created his favorite comics as a kid. “I know I’ve done it, I’ve drawn it, I’ve seen the finished pages, I’ve seen it in color – it looks awesome – I think it will truly hit me once I hold the actual comic book in my hands. It’s something I’ve always wanted to do and something I didn’t think I would actually get to do.”

Without television, Beyale (b. 1982, Shiprock, New Mexico) turned to comic books for entertainment and escapism. Since before he can remember he was trying to copy the figures he read about – Spiderman, Superman.

“Drawing was something that I’ve always enjoyed. It was an outlet for me,” Beyale said. “Growing up without electricity or luxuries like movies, that’s why I gravitated toward comic books, because you can read any time. You can create anywhere. As long as I had pencil and paper I could create my own worlds, create my own characters.”

What the Navajo Reservation lacked in creature comforts, it made up for with a small selection of comic books at the corner store to spark Beyale’s interest. As luck would have it, a dedicated comics store eventually opened in Farmington allowing him to further feed his growing passion.

The store even hosted art contests for kids to compete against others their age. Beyale always won.

“You could win maybe five bucks,” Beyale recalls. “It was enough to get some comic books.”

Beyale was fortunate to be raised in a household where both parents were artists. His folks collected art magazines. His mom was a beadworker. He saw silversmiths and jewelry makers around town. The idea of eventually turning his creative talent into a career was supported.

“I grew up with a strong female presence in my family. My mom was my superhero. She takes care of everything, takes care of the household, makes sure things get done,” Beyale said. “Physically and emotionally, she was there, she could see if something was bothering me to come talk to me.”

Beyale also remembers the influence of a strong grandmother, aunts and female cousins.

“Being surrounded by them inspired me, they made me stronger,” he said.

The artist was also inspired by one of his favorite comic characters growing up, Storm, a female from the X-Men series.

“In Navajo culture, we’re a matrilineal society, women tend to have more power and in a lot of our cultural stories, women have power; in Pop Culture in general, there’s not a strong female indigenous presence, anytime you talk about indigenous people, it’s usually male centered,” Beyale said. “I wanted to create a strong female presence, I wanted to create my own version of Wonder Woman that I can like, but (who) also is empowering and can inspire others.”

A major recent development in the art world has been an opening of access to top fine art galleries and museums for artforms previously dismissed. This has had a particularly important to Native American artists whose baskets, beadwork, quillwork, regalia, pottery and jewelry had previously been ghettoized as “craft” objects.

The same goes for the graphic arts: comic books, street art, graffiti, illustration. Once relegated as hobbies for kids – if not vandalism – these are now the most popular artforms in the world. These images dominate mainstream media, social media and are increasingly sought after by the upper echelons of the traditional art world, collectors included.

Beyale, who earned his bachelor’s degree in 2014, has experienced this firsthand.

“When I first went (to IAIA) they were kind of hesitant and some of them looked down on comic book art, street art,” he said. “Now they’re the ones calling us because a lot of the people I went to school with were from that generation that transitioned (graphic arts to fine arts); now they’re calling us to come talk to the students, to showcase our art.”

Proof positive of a lesson he shares with younger creatives.

“Don’t try to follow trends – what other people are doing – by the time you get good at that, the next thing will come along,” Beyale advises. “If people see how passionate your work is, then that makes it unique.” 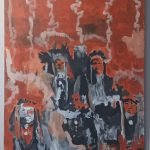 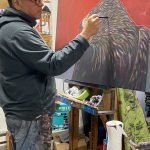 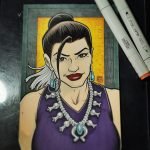 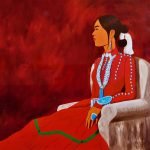 Jason Parrish: from the Navajo Reservation to Paris’ Grand Palais