“Nick Cave and Jack Cave: The Color Is: A Fashion Exhibition,” created by Internationally acclaimed multi-disciplinary artist Nick Cave and his brother, fashion designer Jack Cave, will bring a once-in-a -lifetime collection of avant-garde and haute couture inspired fashion to the Roundhouse of the DuSable Black History Museum and Education Center. The exhibition which opens on August 27, 2022, will continue through November 27, 2022, and is in partnership with the MCA Chicago and the groundbreaking retrospective exhibition “Nick Cave: Forothermore,” which is currently on display at the MCA until October 2, 2022.

This is the first time that these works of art will be exhibited on public display and the DuSable Museum is the first Museum in the world to ever exhibit Nick Cave’s or Jack Cave’s “fashion art.”

“I am thrilled to be sharing my career’s work in my chosen hometown. I don’t take the gravity of this moment for granted,” Nick Cave said. “From the MCA to the DuSable Museum and beyond this community and city-wide project is the realization of a dream that could only happen in Chicago—this way, with this brilliant team and throughout this great city.

“The Color Is,” will consist of 40-45 unique looks of wearable art on non-Binary human forms suspended on elevated platforms of varying heights. Accessories such as head pieces and footwear will be highlighted, and the head-to-toe garments have been constructed from a wide variety of materials including beads, pearls, wire, feathers, sequins, synthetic hair and recycled textiles and prints designed by the Cave brothers. The ensembles feature intricate layering that is emblematic of human universality, highlighting intricacy, complexity, color and uniqueness. According to both Nick Cave and Jack Cave the clothing is genderless.

More than 400 individual items have been condensed into looks that may consist of 200 or more individual objects. Once layered and combined the different objects will make-up complete looks, all designed and crafted by the artists.

“The Color Is,” also contains an educational component which highlights the exhibition themes, references and history through digital animation, film montages, extensive explanatory text and high resolution still images. There will be some surprise audio visual elements featured in the exhibition as well as on the DuSable Museum website and the Bloomberg Connects App. All objects in the exhibition were created for both “The Color Is” live performance and “The Color Is” exhibition as a companion exhibition of “Nick Cave: Forothermore” and are Nick Cave’s most recent body of created work. The pieces have been created within the past nine to 12 months.

“The DuSable Black History Museum and Education Center celebrates the multilayered, elements of Black culture that Nick Cave and Jack Cave’s brilliant work is steeped in,” Danny Dunson, Director of Curatorial Services and Community Partnerships, said. “Our presentation of ‘The Color Is,’ positions Nick Cave’s and Jack Cave’s art practices within the heart of Chicago’s African American community. The Southside community represents what continues to inspire both Cave brothers as artists and activists.”

Fashion has been a natural part of the Cave brother’s artistic practice. Growing up with five aunts who sewed, Nick Cave and Jack Cave had an early interest in material culture and construction. The brothers are inspired by the homey-whimsical interiors of the Grandparents home that contained African American handicraft traditions, such as quilting and crochet. Both Nick and Jack Cave studied fiber arts as undergraduates at the Kanas City Art Institute where they first learned to sew. In the 1980s the brothers would create fashion spectaculars together.

ABOUT THE DUSABLE MUSEUM

The DuSable Black History Museum and Education Center, a Smithsonian Affiliate, is the nation’s first independent Museum dedicated to the collection, preservation and study of the history and culture of African Americans and people of African descent. 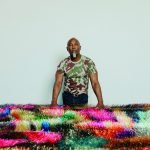 August 25, 2022 No Comments on Nick Cave fashion alongside his brother’s at DuSable Black History Museum 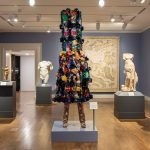 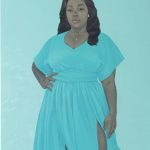 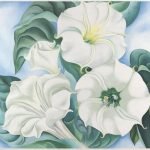