The National Museum of Wildlife Art announced the addition of an important oil painting by Thomas Moran to the Museum’s permanent collection. While National Museum of Wildlife Art has previously displayed pieces by Moran, those items were all on loan. Generously donated by Trustee Emeritus Lynn Friess, Eternal Snows of Mount Moran is the first Moran to be added to the Museum’s permanent collection, and a significant work in its own right.

Moved by her long history with the Museum and her desire to give back to the community, Friess believes that this is the right piece in the right place.

“Lynn and Foster have significantly supported the Museum almost from its founding in 1987,” Museum Director Steve Seamons said. “Lynn provided her time and talents for several years serving as a Trustee and as a Chair of the Board.”

The mission of NMWA is to impart knowledge and inspire appreciation of humanity’s relationship with wildlife and nature through art and education. Moran’s work played an integral role in the creation of America’s first national park, and indelibly aligns with the mission of the Museum. While the Museum celebrates wildlife and nature from around the globe, collecting pieces with regional significance is always a priority.

Moran’s depictions of the Tetons are few and far between, one of the most notable resides in the White House, and another at the Metropolitan Museum of Art. Asked about the significance of this donation, Director of Marketing, Madison Webb said, “For the first time visitors will be able to view Moran’s depiction of his namesake peak just a few minutes’ drive from the mountain itself. It is an honor for the Museum to bring this piece home, and to share it with the public.”

Yellowstone National Park will celebrate its 150th Anniversary this summer, in no small part thanks to the work of Thomas Moran and others on the Hayden Expedition of 1871. The Museum plans to exhibit 20 of Moran’s field sketches this summer, alongside this important new acquisition.

Before canonizing Moran, as brilliant as his landscape painting was, it is equally problematic for its erasure of Indigenous people and alignment with Manifest Destiny and white nationalist mindsets. Furthermore, much of his painting, while seemingly realistic, was reimagined by the artist to depict what these landscapes likely looked like prior to the arrival of industry and white settlers – and Moran. Moran removes the damage done by industry to his scenes along with the area’s Native inhabitants.

Eternal Snows of Mount Moran is on view now.

The problem with Thomas Moran 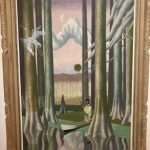 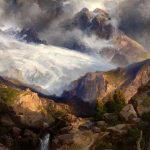 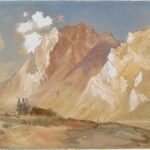