Five thousand two hundred and thirty-four miles separate Tohatchi, New Mexico and Paris, France on a globe. The metaphorical distance between the Diné (Navajo) Reservation and Paris’ Grand Palais, located along the Champs-Élysées, host of one of the most important art exhibitions ever held, the 1905 Salon d’Automne which introduced Fauvism to the world, is even greater.

Jason Parrish (Diné) bridged the distance for the first time in 2018 when, upon taking the suggestion of a collector, he entered his work into the Salon du Dessin et Peinture a L’Eau (exhibition of water-based design and painting) – Parrish paints in watercolors. He’d given up on being juried into the show after not receiving a response to his application for over a month, then an envelope arrived with a Paris return address.

Fortunately, French is one of four languages Parrish speaks – along with his Native Diné, English and a little German – so he was able to open the letter and immediately learn he was invited to display his work at the annual show held hosted by Grand Palais. (Parrish first began picking up French watching French Open tennis on TV as a kid and then studying the language further in high school and college to become fluent.)

Parrish couldn’t attend the first year he was invited, but the following year he followed his work, making his initial visit to the City of Lights.

“I did not feel or think about the situation as I was walking into the Grand Palais on opening night, all I could think about was, did I do everything I could do to put my work in the best spotlight – did I choose the right frames, did the glass hold up going overseas,” Parrish said of his first trip to Paris and his participation in an exhibition which had him following in the footsteps of Matisse.

Parrish stayed in the spare bedroom of a friend of a friend and visited the Louvre and Musée d’Orsay.

Of the countless iconic works of art he saw, Manet’s Luncheon on the Grass affected him most deeply.

The significance of what he’d achieved would only begin resonating with him a couple weeks after returning to Tohatchi where a gallery owner asked him what the moment felt like?

“I thought, ‘wow, that’s pretty amazing,’ considering where I live, there’s probably nobody for 500 miles whose done what I’ve done,” Parrish said.

He now participates yearly in the show, one of three – along with Santa Fe Indian Market and the Autry’s American Indian Arts Marketplace – down from a peak schedule of 12 when he was launching his career.

From Banker to Painter

Art was only a side interest to Parrish who graduated from the University of New Mexico with a history degree in 2007 and then began working in a Gallup, New Mexico bank. By 2012, his side interest had evolved into a side hustle and then a side business. Establishing a track record of selling paintings and with the encouragement from patrons, he left the bank to become a professional artist, making his bones on grueling Western festival and fair circuit, driving hundreds of miles each week to stand for hours in the summer heat pitching paintings to would-be buyers.

“When I went to my first show at the Heard Museum (2014), I had the goal of selling three paintings,” Parrish recalls. “I said to myself, I have three strong paintings, and these paintings I’m going to focus on, if I get someone interested, this is my plan, I’ve got it – bullet point, bullet point, bullet point – then back off and see what they like. I really didn’t need use a whole lot of marketing at the show because everyone who liked what they saw purchased a painting.”

It’s been that way ever since for Parrish, whose path to career success has been years shorter than typical.

He has no answer for fellow artists who ask him how he’s done it.

Parrish was born in Gallup in 1985 and raised on the Diné Nation in Tohatchi. In the Navajo clan family, he is Dzil T’aanii (Near the Mountain People) from his mother’s side and born for To’dichii’nii (Bitter Water People).

All of his work focuses on Diné culture. Parrish’s paintings fuse historical accuracy with contemporary style. The artist uses his history degree to discover source imagery at the local community college along with personal and family observations.

“Back when my grandparents were alive – they both passed in 2017 – I got to talk to them a lot and got a lot of input as far as what I read in books,” Parrish said. “Naturally, there was so much more that I did not know so I was very lucky to have done that research at the kindness of my grandparents.”

These details show up in his artwork.

The artist doesn’t only look backward for inspiration.

“I like to observe the people here at the annual fairs, for instance, the Navajo Nation Fair where a lot of the young women dress up in traditional attire and I get to look at what colors they’re using, what kind of fabrics they’re using,” Parrish says. “A lot of the styling and the jewelry, when I ask, their influence is from their grandparents, so I thought, I’m going to use this, I’m going to go with this.” 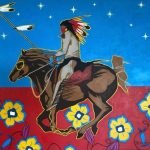 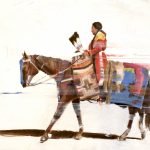 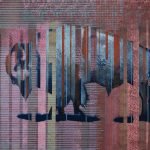 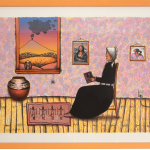