Hudson River Museum presents two companion exhibitions—The World of Frida and Frida Kahlo in Context—that celebrate the culture, style, and persona of visionary Mexican painter Frida Kahlo (1907–1954), who continues to inspire with her story of love, loss, and incredible bravery. The exhibitions will be presented in both English and Spanish and will be on view from February 4–May 22, 2022.

The World of Frida / El Mundo de Frida features works of art by more than seventy five national and international artists practicing in a variety of media. The exhibition includes Frida Kahlo as subject as well as pieces inspired by her life and art, her beautiful garden, Mexican culture and fashion, vibrant colors, and surrealism. In the companion exhibition, Frida Kahlo in Context / Frida Kahlo en contexto, iconic photographs and artworks explore Kahlo as a multidimensional Latinx artist, including a key painting by Diego Rivera on loan from Art Bridges. The works are juxtaposed with vibrant costumes of Oaxaca from the Ballet Folklorico Mexicano de Nueva York.

Collectively, the exhibitions explore overlapping themes that enhance our understanding of Frida Kahlo’s life and art as well as her enduring hold on the public’s imagination.

THE WORLD OF FRIDA

The diverse group of more than seventy-five artists reflects today’s global celebration of Frida Kahlo as an iconic, renegade artist and outspoken feminist. Beyond her powerful and personal paintings, people admire how she persevered throughout her life against devastating odds. Stricken with polio as a child, and left permanently injured by a bus accident at age eighteen, Kahlo was subjected to an enormous amount of pain and turmoil. While recovering from multiple serious injuries that confined her to bed, she returned to her childhood hobby of painting—and found an emotional outlet.

The featured artists have reinterpreted many aspects of Kahlo’s life, and this installation organizes the rich array of artworks into several sections. Groupings include artwork in homage to Kahlo’s self-portraits and other paintings, as well as artwork inspired by iconic photographs of her by Nickolas Muray. Other groupings highlight details of her life, such as her love affair and tumultuous marriage with the Mexican muralist, Diego Rivera, her painful physical struggles, and her feminism, which was ahead of her time.

There are also sections devoted to artists responding to Kahlo’s love of flowers, plants, and animals. The exhibition concludes with memorials to Kahlo created in textile and mixed media. In myriad ways throughout the exhibition, artists have channeled her audaciously charming and carefully crafted persona. Kahlo passionately embraced indigenous Mexican traditions and adorned herself with ornate jewelry, flowers, and bright colors—often dressing in folk attire, or occasionally in drag.

“Frida Kahlo summoned a stalwart and heroic strength to push forward through her life, which is why I believe she continues to resonate today,” Carrie Lederer, who curated the exhibition for the Bedford Gallery, said. “She has become a beacon for those who have also struggled, and her alluring biographical artwork not only serves as artistic inspiration but as a visual interpretation of strength and bravery.”

In contrast to Kahlo’s current fame, she remained largely unrecognized until the late 1970s when art historians and political activists rediscovered her work. Since then, she has became an icon to many—including the Chicano, feminist, and LGBTQ movements. The World of Frida is a remarkable tribute to an artist who continues to influence millions by the simple fact that she always remained true to herself.

The exhibition, organized by the Hudson River Museum to complement The World of Frida, provides a window through which to understand the artist by exploring her culture, life experiences, and personal expression through portraits, historical images, and folkloric costumes.

Frida Kahlo has sparked both admiration and fascination in people from around the world. There is an aura of mystery around the artist, in which the story of her life is intertwined with the personal subject matter and powerful surreal style of her paintings. A devastating bus accident at age eighteen left Kahlo with painful injuries that never completely healed, despite numerous surgeries throughout her life. Yet, the time spent in recovery led her to take up painting to express her experience of pain and loss. As a young, aspiring artist, she sought the counsel of famed Mexican Muralist Diego Rivera, twenty years her senior, and they fell madly in love.

Their complicated marriage included a great deal of admiration for each other’s art, but also numerous infidelities on both sides, divorce, remarriage, and emotional pain that added to Kahlo’s physical struggles and emerged powerfully in her paintings.

The persona of Kahlo is inextricable from her beloved Mexico and her relationship with Rivera. Frida Kahlo in Context explores this milieu, showcasing legendary photographs of Kahlo as well as artwork related to her personal life and Mexico. Eighteen photographic portraits capture Kahlo’s personality, fashion, and domestic life, including her relationship with Diego Rivera. The setting of several images is the couple’s beloved home, La Casa Azul (the Blue House), in Coyoacán, a municipality of Mexico City.

Kahlo was deeply invested in Mexico’s cultural revitalization and respected the splendor and resilience of indigenous Mexican culture. The exhibition also includes nineteenth-century photographs and a 1930 painting by George Stengel that illustrate locations around Mexico City frequented by the artists, such as the Paseo de la Reforma, the Cathedral of Guadalupe, and the monastery at Churubusco. These images are complemented by five dance ensembles from Oaxaca, Mexico, the region where Kahlo’s mother was born.Five costumes, lent by the Ballet Folklórico Mexicano de Nueva York, reflect the persona Kahlo crafted for herself wearing similar traditional clothing.

Arriving as a special addition to the exhibition in March will be La ofrenda (The Offering), an important painting by Diego Rivera, on loan fromArt Bridges. It depicts three people at an altar to honor the dead in a rainforest, paying tribute to the Mexican cultural tradition of Día de Muertos, the Day of the Dead. La ofrenda reflects the beauty and cultural endurance of post-revolution Mexico, demonstrating Rivera’s belief that “the artist is a direct product of life … and a reflector of the aspirations, the desires, and the hopes of his age.” 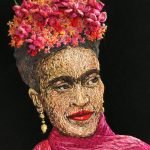 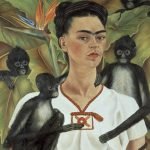 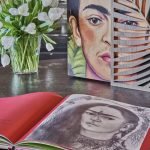 Frida Kahlo Dallas Museum of Art exhibition not to be missed