Indigenous Celebration New Mexico 2022 marks a historic coming together of the state’s Indigenous and non-Indigenous cultural institutions. Throughout the year, the organizations are collectively acknowledging a series of historic anniversaries occurring around the state–including the centennial Southwestern Association for Indian Arts Indian Market, the largest, longest running, Native arts market in the world–along with putting their unified heft behind promoting The Land of Enchantment as the most notable destination to experience Native American culture and the most recognized location to learn about, view and purchase Indigenous Art.

Santa Fe serves as the centerpiece. With dozens of galleries and a handful of world-class museums devoted to Indigenous artwork–not to mention the hundreds of Native artists directly selling their work there during markets and festivals–America’s oldest capital city is without peer in the realm of Indigenous artwork.

Which can present a problem to first-time visitors. Where to begin when looking for Native American art in Santa Fe?

The pottery making tradition among the Pueblo tribes of what is now New Mexico dates back over a thousand years. The name “pueblo,” which means “village” in Spanish, comes from the original European colonizers of this area who so described the communities of adobe structures the area’s Indigenous people organized themselves around.

Initially serving utilitarian purposes, the pots have taken on a more decorative role in supplying the tourist trade since whites started visiting the area in the late 1800s and increasingly so ever since.

Critical to understanding and appreciating Pueblo pottery is its manufacture. Potter’s wheels are not used. Nor are molds. Pueblo pottery is hand made from the rolling of wet clay into thin coils and then by stacking those coils on top of each other to create the form prior to firing and painting.

Andrea Fisher Fine Pottery has been specializing in hand-made, hand-painted, Native American pottery from the Southwest since opening 30 years ago. Located steps from Santa Fe’s famed Plaza, it has evolved into the premier Pueblo pottery gallery.

The store layout has been intentionally designed to help newcomers by organizing pots from specific Pueblos together so visitors can recognize the difference–Acoma, Laguna, Hopi, San Ildefonso and so on. Each Pueblo’s pots have unique characteristics. At Andrea Fisher Fine Pottery, the distinctions are highlighted for shoppers to easily identify their favorite style.

The legends of the genre are also spotlighted providing additional history and context. This begins with Maria Martinez (San Ildefonso Pueblo; 1887-1980), best known for her striking black pottery found in museum collections around the world.

“She’s really the one who made all the rest of this possible and that’s because she was, first of all, extremely talented,” Andrea Fisher told Forbes.com, also noting how committed to production Martinez was. Her ability to make work was supported by family, including four sisters who were also potters.

“In those early days the sisters were getting 25 cents for their pots and Maria was getting a dollar and so those sisters would help (Maria) out, make sandwiches for the kids and do the laundry, and that way Maria could be incredibly prolific,” Fisher said.

Martinez was an innovator in art and business.

“She was sort of the first Indian marketer,” Fisher explains. “She could talk to the white guys who came out and bought (pots), and there were a lot of people in those early days in the 20s and 30s in Santa Fe who recognized her talent, and so all of those things combined and made her the founder of contemporary American Indian potters.”

The influence and artwork of Maria Martinez pervade Santa Fe like sunshine. Traces of her are everywhere.

She wasn’t the only grande dame of Pueblo pottery. Andrea Fisher Fine Pottery highlights these women as well.

“(Nampeyo) did the same thing that Maria did, took (pottery) from utilitarian to an art form, away from a curio into a piece of art,” Fisher said.

Also like Martinez, Nampeyo paired business acumen with brilliant artistry, venturing to the Grand Canyon not far from the Hopi villages to sell her work to the throngs of tourists there

“All those matriarchs, they raised the bar for everybody,” Fisher said.

Fisher additionally sells pots from contemporary Native American artists. A regular treat for customers is seeing artists bringing in new pieces for purchase by Fisher and resale around the world.

Familial traditions and legacies background and foreground Native American art in Santa Fe and across the Southwest.

No better example exists than with Nampeyo whose great-great-grandson is painter Dan Namingha (Hopi-Tewa; b. 1950). Namingha’s work has been collected and exhibited globally. He belongs to the first generation of contemporary Native American painters who coalesced in Santa Fe around the founding of the Institute of American Indian Arts in 1962, creating the genre.

Along with family ties, association with IAIA acts as the next most common connection among countless Native American artists.

“During my time there, in my experience, it was almost as freeform,” Namingha told Forbes.com of the early days at IAIA which celebrates its 60th anniversary this year as the only institution in America dedicated to art production by Native Americans. “The students were allowed to create whatever they wanted. Lloyd (Kiva) New was the president of school at the time and (he) was a designer and an artist. What he wanted were students to feel free taking their traditional background into another place with a contemporary context. We were free to do that.”

The philosophy marked a dramatic shift from previous attempts to assimilate Indigenous people through education to the dominant Euro-centric, white culture. For the first time, Native students were encouraged to celebrate their cultural traditions, using their tribal heritage as a springboard for creating something new and personal.

Fritz Scholder and T.C. Cannon were among the other luminaries teaching and training, respectively, at IAIA during this period. As was Earl Biss (Apsáalooke; 1947-1998) whose deeply spiritual paintings reflecting his Crow heritage are not to be missed at Galerie Zuger, a couple doors down from Andrea Fisher.

Namingha has owned Niman Fine Arts near the Plaza since 1990. In addition to his paintings and sculptures, the gallery shows the work of his sons.

More paintings can be found at Native-owned Blue Rain Gallery in the Railroad Arts District which specializes in representing today’s Indigenous artists, and at the famed La Fonda Hotel on the Plaza which boasts one of the finest art collections at any hotel in the world–historic and contemporary–with an emphasis on Native American paintings. Free docent tours of the collection are available to the public Wednesdays through Saturdays at 10:30 AM.

Next door to Niman Fine Arts is Allan Houser’s gallery, fitting, as Houser (Chiricahua Apache; 1914-1994) and Namingha were good friends. Houser was one of the early instructors at IAIA and remains the most prominent and decorated Native American sculptor.

An exceptional collection of Houser’s artworks can additionally be found at Hotel Santa Fe Hacienda & Spa, the city’s only Native-owned hotel. Throughout the property’s entry and lobby, full-sized, museum-quality examples of Houser’s iconic figurative sculptures along with flat, wall-mounted pieces, place guests among his masterworks.

Zuni is the largest of New Mexico’s pueblos with roughly 80% of households there earning a primary living off the production of artwork. Digest that staggering figure for a moment.

Established in 1981 as an artists’ cooperative, Keshi Gallery provides retail space in Santa Fe for Zuni artists to sell their work in the tourist mecca without having to navigate the volatile commercial gallery scene there from home, 200 miles away.

For shoppers, Keshi Gallery assures authenticity because staff members have seen almost every piece come through the door. As at Andrea Fisher, when looking at Native American art in Santa Fe at Keshi, contemporary artists routinely stop in to sell their latest creations and chat with fortunate shoppers.

In a market beset by knockoffs, the service proves invaluable. Keshi Gallery employees further take time to educate shoppers on how to spot imitations, keeping a selection of fakes on hand for customers to compare side-by-side with the real thing.

For many, jewelry may highlight the Native American art in Santa Fe. The finest collection of Native American jewelry from the Southwest calls the Wheelwright Museum of the American Indian home. The institution on Santa Fe’s Museum Hill celebrates its 85th anniversary in 2022.

“The intent of the museum was to become the center for the story of Native American jewelry and (we) started collecting 30 years ago with very direct intent,” Jean Higgins, interim director of the Wheelwright Museum of the American Indian, told Forbes.com. “Then we had some incredible donors who had been collectors and wanted to give their pieces, but they wanted it to be somewhere where it would be seen, so they also gave seed money to start building the gallery.”

A 1,600-square-foot space purpose-built for the display of pieces from the museum’s permanent collection of jewelry opened in 2015. Collectors aren’t the only ones gifting their treasures here, an increasing number of contemporary jewelers are donating their best items as well–eschewing requests from East Coast museums–in order for the material to remain close to home and family.

Among the display’s highlights are Charles Loloma’s (Hopi; 1921-1991) revolutionary bracelets, necklaces and rings. Like Houser, Loloma was an instructor at IAIA in the school’s early days and he remains the most celebrated Indigenous Jeweler long after his death.

Loloma’s artistic expressions in silver, turquoise, lapis and corals are no less singular and recognizable to a trained eye than the brushwork of any painter. He is the rare jewelry maker known by name, a figure essential to the story of Native American art, regardless of medium.

Welcome to Native American art in Santa Fe. The journey has just begun. 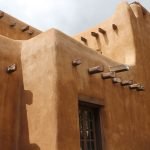 A Guide to Art Museums in Santa Fe

September 8, 2022 No Comments on A Guide to Art Museums in Santa Fe 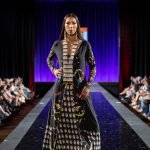 September 5, 2022 No Comments on SWAIA: Indian market in Santa Fe 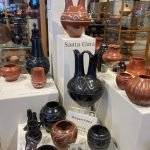