Throughout Dusti Bongé’s (1903-1993) long artistic career, she experimented with a wide variety of Modern painting styles from Cubism to Surrealism and Abstract Expressionism. Our example this week through See Great Art’s partnership with the Dusti Bongé Art Foundation in Biloxi, MS is a Dusti Bongé Surrealist drawing.

Herewith a lovely and slightly unusual drawing by Dusti Bongé from her early years. While the majority of her work at the time was focused on depicting cityscapes, landscapes and still lifes, all representing her immediate surroundings, she also did some of these almost dreamy drawings. With slightly amorphous curvy figures, some of which seem to hover or float; a few of these drawings are reminiscent of Chagall’s ethereal figures.

In this drawing it appears as if the figure in the foreground, with her curled up legs sitting by a stream, is being embraced by an angelic creature with a halo. Behind them rising along a diagonal across the paper, are three more dreamlike, floating angel figures. They are surrounded by curving forms that appear to be wings, but that also kind of look like banana leaves. The legs of the three hovering angels seemingly undulate down until they become one with the ripples in the stream of water.

Perhaps these are imaginary guardian angels, perhaps they represent the spiritual calm Dusti found enveloping her while sitting at the water’s edge. It is hard to know. What is clear is that they are an early sign of her venturing into surrealist themes. Interestingly, Dusti did two sketches with this very same composition; she also did several with figures representing a mother and a child. They are all introversive compositions with mostly female figures surrounded by various patterned backgrounds. These patterns in the form of stippling, wavy lines, cross hatches etc., also became a tool often used in her later surrealist compositions. 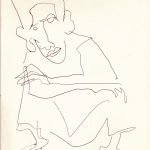