Dusti Bongé miniature paintings represent a fascinating aspect of her career. There may be, but I’m unaware of any artist who so thoroughly engaged with painting on this tiny scale.

This week, Executive Director of the Dusti Bongé Art Foundation Ligia M. Römer shares with us another gem of a Dusti Bongé miniature painting as part of the Foundation’s mission to promote the artistic legacy of Dusti Bongé, Mississippi’s first Abstract Expressionist painter, through exhibition, conservation, scholarship and education.

This week we share another miniature from the 1970s. Dusti Bongé created a lot of works on paper during this time, at various sizes, in various media and often with distinctly arranged elements. The miniatures are done primarily in watercolor and/or acrylic and often have a strong horizontal or vertical, layered effect.

We see that layering clearly in this work, where there are several bands of mostly black and gray color with varying degrees of transparency. The primarily vertically applied layers of pigment create a loose pattern that is broken by the strong horizontal black stroke across the lower half, and the hint of pale pink below it. This one break through the prevailing directional pattern actually emphasizes it.

In addition to the interplay between vertical and horizontal, there is also a degree of tension between the choice of color and the method of applying it. On the one hand, the choice of mostly dark tones gives this composition depth and weight. On the other hand, the subtle layering of the watercolor gives the work a somewhat delicate and ephemeral quality.

Like Dusti’s other miniature paintings, this small work is an exercise in restraint. With just a few brushstrokes Dusti creates a masterful composition. In fact, this work, which is so very small and yet so rich, could work at any scale. 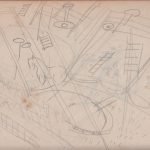 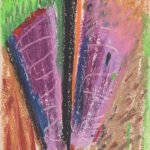