See Great Art’s partnership with the Dusti Bongé Art Foundation in Biloxi, MS this week focuses on the artist’s spirituality and how that influenced her practice.

The concept and practice of mindfulness, fundamentally, of being aware and present in the moment while creating, rather than thinking of other things, seemed to suit a lot of modern abstract artists.

This, as well as psychoanalytical ideas about the power of the unconscious, offered artists different avenues of engaging in the creative process.

In Dusti’s renewed approach she explored various core Buddhist concepts directly, more literally, in her art. She explored the Zen Buddhist notion of the “void” through her abstract work seeking to somehow capture its essence. She studied Chinese calligraphy, repeatedly painting the symbols for the idea of “absolute compassion” by itself or together with depictions of bamboo in all its simple splendor.

She created these works solemnly, with repetitive movements leading to ever changing compositions with bamboo stems and leaves, stems with their ring patterns, and calligraphy. Sometimes they would be in vivid colors like this work, other times the colors would be muted, soft greens and tans, or simply black and white.

Dusti Bongé’s bamboo and calligraphy studies allowed her to be truly present. Both the process and product being meditative, they must have offered her a way to clear her mind. This, in turn, freeing her to allow the depths of her unconscious to come forth in her other work. 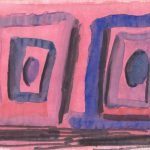 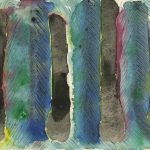