This week, as part of our collaboration with the Dusti Bongé Art Foundation in Biloxi, MS, we take a look at an abstract watercolor by Dusti Bongé with analysis, as always, from Foundation Executive Director Ligia M. Römer.

The 1980s were a very busy decade for Dusti Bongé. After publishing her book, “The Life of an Artist” in 1982, she continued to make art at a very steady pace. In addition to painting some of her most memorable large canvases she created numerous works on paper in various sizes.

These later works all show a shift in the nature of her abstraction.

Instead of the broad gestural movements of her abstract expressionist compositions, these works often have more nuanced forms in them. Although these forms are still not specifically representational, they are occasionally suggestive of familiar things. This is clearly evident in such hallmark works as Oyster Chorus and Passage.

This small watercolor painting (with a few felt tip pen marks) has a very similar compositional arrangement to Oyster Chorus with three circular, or rather, spherical, forms arranged in close proximity to one another. They are placed at a slight diagonal, just off center in the composition, with an implied “horizon line” created by the orange and green in the background.

Although we don’t know what the three spheres are, their arrangement, all slightly overlapping, with the left pale purple one being positioned a bit lower and more forward, almost seems like an abstract still life. The choice of colors contributes to this abstract quality, insofar that it reveals nothing about the true nature of the spherical shapes. 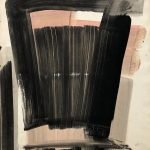 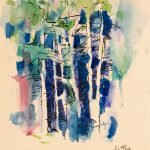 May 23, 2022 No Comments on Hollis Taggart celebrating Audrey Flack exhibition on 91st birthday 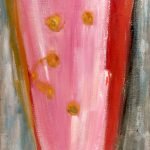 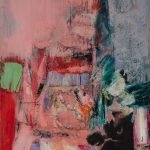