A hometown art museum provides the gift of time.

Racing through an art museum trying to cram hundreds of paintings and sculptures and pottery and tapestries into your visual memory in an hour or 90 minutes on vacation, knowing you might never return, or at least not return for many years, always disappoints. In trying to see everything, you end up seeing nothing. Perhaps one or two images last in your mind when you wake up the next morning, but they haven’t reached you.

You didn’t have long enough to connect with them.

You didn’t have time.

Your hometown art museum – big or small – gives you time. Across regular visits, you have the time to contemplate artworks, notice previously overlooked details.

This time allows for evolution.

The artworks’ meanings and impacts change as you do. At a hometown art museum, you’ll find – to your surprise – your favorite pieces change. As new exhibits come and go, as objects from the permanent collection rotate, as time passes, your horizons broaden.

My hometown art museum is the Cummer Museum of Art and Gardens in Jacksonville, Florida. Close looking, deep thinking and the pleasure of hours spent inside have all contributed to my favorite paintings there changing. Initially, my favorite work from the collection was John Singer Sargent‘s crisp, delightful, joyful mountain landscape In the Alps. An unusual departure for one of America’s greatest portraitists, this alpine scene with a whimsical goat on top – an inspired single sweep of a brush stroke – connected with my nature loving side.

I continue to adore the painting and never miss a chanced to spend time with it, however, over the course of years and many visits, Mildred Thompson’s recently acquired Magnetic Fields has surpassed it.

As I’ve changed, as my tastes have evolved, I find myself increasingly obsessed with its radiating energy, luminous colors, its aura.

Learning more about the artwork led me to learning more about the artist. Thompson’s biography – born in Jacksonville before taking on the world, shunned in New York due to her gender and race, following in the footsteps of Josephine Baker, Langston Hughes, James Baldwin, Beauford Delany, Paul Robeson and other creatives who found a more welcoming world in Europe, continually bucking contemporary trends, always going her own way, outrageously underrecognized, brilliant – has come to deeply resonate with me.

That is the gift of a hometown art museum. In total, I’ve spent well over an hour in front of “Magnetic Fields” across numerous visits, allowing me to trace the hand of the artist, absorb the spirit of the painting, change my mind as my perspectives have changed.

That close looking, that deep thinking, that coming to know an artwork is not possible when breezing through a museum thin slicing 500 images in 60 minutes.

They occur over time.

The Cummer Museum of Art & Gardens, built on the site of the home of Ninah (1875-1958) and Arthur (1873-1943) Cummer, opened its doors November 10, 1961. The couple met while attending the University of Michigan and moved to Jacksonville after their marriage in 1897. Jacksonville was the center of Arthur Cummer’s expansive family lumber business.

In 1902, the Cummers began constructing an English Tudor Revival mansion situated on Riverside Avenue. The home was part of the family compound of three houses with adjacent gardens.

Mrs. Cummer gave birth to a daughter on November 13, 1909. The girl was named DeEtte Holden Cummer, but, sadly, lived only seventeen days. Upon the death of their only child, the Cummers devoted themselves to civic charitable work.

Mr. Cummer became president of the Cummer Lumber Company upon his father’s death in 1909, served as director and vice president of Barnett National Bank, and was a leading member of the Jacksonville Chamber of Commerce. Mrs. Cummer distinguished herself by organizing relief after the fire of 1901 and as a Red Cross volunteer during World War I.

Mrs. Cummer had a keen interest in art, purchasing her first painting in 1906, the beginning of a collection that would eventually number more than sixty works and include Peter Paul Rubens and Winslow Homer. After her husband’s death in 1943, she began collecting more seriously, and expanding her focus from her personal gardens to the development of more parks and green spaces for the community.

When she died on May 25, 1958, Mrs. Cummer’s will established the DeEtte Holden Cummer Museum Foundation and bequeathed the bulk of her estate, including all the works of art, antiques, and the house itself, to the foundation for the creation of an art museum.

The residence did not prove suitable for a museum and architect Harold Saxelbye was chosen to design a new museum building. In 1991 the existing museum building was enlarged with the addition of two galleries on its east side facing the gardens. An adjunct building was purchased in 1990 to house the increasingly important art education center called Art Connections.

The Cummer’s permanent collection now includes more than 5,000 objects, and along with its historic gardens on the St. John’s River, welcomes nearly 150,000 annual visitors. 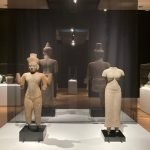 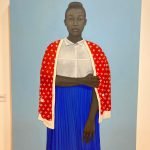 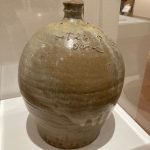 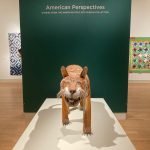 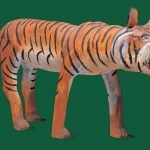 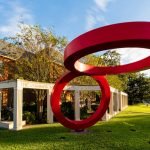 Mildred Thompson’s Magnetic Fields painting at the Cummer fascinates me. It takes pride of place at the Museum. The institution acquired the 61 ¾ x 95 ½ inch oil on canvas painting in 2019. Thompson painted it in 1991.

I like the painting more each time I see it.

It has presence. “Wall power.”

It absorbs and emanates energy.

The painting bursts. The edges of its canvas can’t contain it. It sends vibrant colors off into the universe.

It puts off light and heat and joy.

I love getting up close to the painting and following Mildred Thompson’s brushstrokes as near as I can, trying to trace her hand on the canvas. Which layers came first? Which colors came first? Were the colors mixed or put straight on? How thick? What was she thinking, what was her state of mind, as she painted this masterpiece of Abstract Expressionism.

Adam Levine, the Director and CEO of the Cummer Museum Jacksonville when the painting was added to the institution’s permanent collection described it thusly:

“It has an exquisite balance to it. The center of the magnetic field is actually off center–it is to the viewer’s left and a little bit higher than the center of the composition, so you think that might skew things, but it actually centers the composition in a dynamic way. What you see are these magnetic fields, these concentric ovals emanating, but cropped by the top of the picture plane, so it creates this sense of the expansion beyond what the viewer is able to see and as a consequence, I think it wraps around the viewer–literally–this magnetic field and pulls you into it in this warm embrace. These bright yellows, these bright reds, punctuated by purple dots and green dots and blue arrows so there are these cool colors that provide contrast and visual interest. These elements together cause you to think, ‘Oh, well, that’s very pleasing,’ at the same you’re thinking, ‘but it’s so interesting’–and there’s no tension between the two.”

I find it fascinating to hear different people discuss paintings they love. Their descriptions will tell you a lot about them.

When Brownlee took over directorship of the Cummer Museum in late 2020, one of the questions I asked her when we first met was what she saw in the museum’s Mildred Thompson Magnetic Fields painting. Brownlee played a significant role in helping grow Thompson’s fame curating the exhibition, “Mildred Thompson: The Atlanta Years, 1986 – 2003,” which was on view at the Spelman College Museum of Fine Arts in 2019. Brownlee was also director at the Spelman museum when the show, which featured a Magnetic Fields painting similar to the Cummer’s, was on view there.

“I’ll never forget when our students came into to the museum at Spelman College (to see the Thompson show). Right away, it was the physics students that got it and so I see telescopes, I see music, I could go on and on.

You’ll only see “something different” if you see the painting multiple times. At a hometown art museum, you can.

So, too, is Augusta Savage, an artist of particular pride for the Cummer and Jacksonville. Savage (1892-1962) was born in adjacent Green Cove Springs.

Savage’s race and gender weren’t the only obstacles she faced in becoming an artist. She was born into a poor family, the seventh of 14 children. Her father, a Methodist minister, violently opposed her expressed interest in pursuing art as a career.

“My father licked me four or five times a week and almost whipped all the art out of me,” Savage is quoted as having said.

Savage became an accomplished sculptor in the 1920s and a core figure in the Harlem Renaissance. She became the first African American member of the National Association of Women Painters and Sculptors in 1934 and the first Black woman to open her own gallery. She was also a renowned art instructor. Jacob Lawrence and Norman Lewis were among her students.

The Constance I. and Ralph H. Wark Collection of Early Meissen Porcelain, donated in 1965, is one of the three finest of its type in the world, and the most significant of its kind in the United States. The collection encompasses more than 700 works, largely tableware, produced by the Royal Saxon Porcelain Manufacture from 1708 through 1780

The Dennis C. Hayes Collection of Japanese Prints, an important collection of 190 Japanese woodblock prints, was donated in 1998 and provides an overview of the evolution of the medium from the 19th century through the early 20th century.

The Cummer’s exceptional botanic gardens are divided into three spaces: the Olmsted Garden, the English Garden and the Italian Garden.

The jewel in the crown of the Cummer Gardens is the Italian Garden, one of only a handful of extant gardens designed by Ellen Biddle Shipman. Designed in 1931 on the site of Arthur and Ninah Cummer’s former garage and a portion of Ada Cummer’s estate they inherited following her death, this garden was conceived as the ultimate display garden for Ninah’s large collection of Italian marble garden ornaments and hundreds of azaleas. Two long reflecting pools frame the view to the green, ficus-covered gloriette that resembles the famous water gardens at the Villa Gamberaia in Tuscany.

The Cummer Museum of Art and Garden’s begins an exhilarating new chapter under Brownlee’s leadership. In a matter of months, she’s already secured an exhibition from one of contemporary photography’s most celebrated and in-demand artists, Zanele Muholi. It’s a stunning achievement for a first act and indicates the globally significant caliber of artwork she’ll be able to bring to Jacksonville.

An exhibition dedicated to contemporary art shooting star Deborah Roberts is scheduled for 2022.

With a rich heritage and renewed commitment to serve its community – all of it – the Cummer has positioned itself to become one of the most exciting art museums in the nation.

I’m proud to call the Cummer Museum of Art and Gardens my “hometown” art museum.